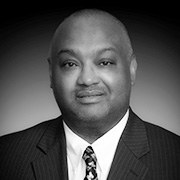 Reggie Thomas is vice president of the community development strategy team for Huntington National Bank. Reggie is responsible for managing the development and execution of strategies to ensure appropriate bank-wide performance under the Community Reinvestment Act.

In collaboration with the 2009 Columbus Housing Partnership, Thomas was appointed chair of the Huntington Homeownership Alliance. In 2002 Reggie was appointed chair of Columbus’s 21st Century Partnership. Reggie won Huntington’s Philanthropic Award in 2000, the Boy Scouts of America’s Whitney M. Young, Jr. Award in 2000 and Business First Magazine’s Forty Under Forty. He currently serves as chairman of the board for Compdrug Incorporated and has served on the board for Gahanna Community Schools.

In 1987 Reggie received a bachelor’s degree in business administration from Mount Union College and in 2004 earned a master’s degree from DeVry University’s Keller Graduate School of Management. He is a 1997 graduate of Leadership Ohio-Class IV and United Way’s Project Diversity-Class XI. He is a current member of the National Black MBA- Columbus Chapter.