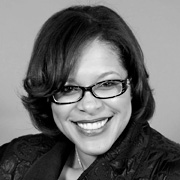 Bleuzette Marshall is the Vice President for Equity & Inclusion at the University of Cincinnati. In this role, she implements the University’s Five-Year Diversity Plan; co-chairs the President’s Diversity Council; provides strategic leadership for the recruitment, retention, and advancement of diverse talent (students, faculty, and staff); assists with supplier diversity efforts; serves as a resource to benchmark trends and promote best practices; and builds partnerships in the broader community.

She administers the university’s diversity incentive grant process to award colleges and units with funds to enhance innovative practices to build a more inclusive university. In addition, she created and is the convener of a chief diversity officers’ roundtable with corporations, community organizations, colleges, health systems, and legal firms to serve as a resource and think tank to advance diversity and inclusion efforts within the region.

Previously, she was the Senior Director of Development for Provost & Student Affairs at the UC Foundation. Under her leadership, $20 million was raised for university-wide scholarships and programs, and she developed the Onyx & Ruby Society – an affinity based giving program for African American alumni.

She has worked diligently to design and implement programs to promote diversity and aid in the retention of students. She co-created the Brothers And Sisters Excelling (BASE) Mentoring Program, organized the Tyehimba Graduation Celebration, facilitated a series of workshops on the freshman year experience, and served as the co-chair of the university-wide diversity conference. She was also an adjunct instructor for a diversity course at Miami University (Oxford). In addition, Bleuzette has served as an advisor to several student organizations including Latinos en Accion, Cincinnati Women in Excellence & Spirit Together (CWEST), and the Senior Class Officers. Currently, she is the advisor for Sigma Phi women’s honorary.

Bleuzette is an alumna of the University of Cincinnati and its prestigious Darwin T. Turner Scholars Program. She earned a B.A. in Psychology, a M.Ed. in Educational Foundations, and a Ph.D. in Educational Studies. She is also the founding president of the UC African American Alumni Affiliate (4A). During her tenure, an All-Class Reunion was implemented in conjunction with Homecoming that reconnected eight decades of graduates.

Within the community, she was the project manager for the Greater Cincinnati International Hall of Fame and an educational consultant to White Hat Management. Currently, she serves on the boards of the Cincinnati Recreation Foundation, Osher Lifelong Learning Institute, Public Media Connect, the African American Chamber, and Project ArtReach. She is also a member of the Cincinnati Chapter of The Links, Incorporated, Alpha Kappa Alpha Sorority, Incorporated, the Greater Cincinnati Hispanic Scholarship Fund Celebración, and St. James A.M.E. Church - Covington. Bleuzette has been recognized with the Cincinnati Human Relations Commission’s Champion for Connecting Cultures & Communities Award, the King Legacy Award, the National Diversity Council’s Glass Ceiling Award, and the Cincinnatus Association’s 2016 Donald & Marian Spencer Spirit of America Award.